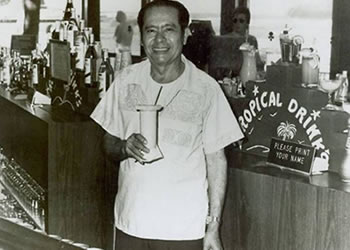 This is a sweet frozen tropical cocktail made with rum, coconut cream and pineapple juice.  Bartenders garnish this delightful frozen drink with a pineapple wedge and maraschino cherry.

Ramón “Monchito” Marrero, a bartender at the Caribe Hilton in Puerto Rico, claims to have created the Pina Colada in 1954.  After a lot of experimenting, Mr. Marrero settled upon the recipe for the Pina Colada, which he felt captured the true essence of Puerto Rico. He continued to serve the frozen drinks at the Caribe Hilton for 35 years after its creation.  He was rewarded for his efforts in 1978 when Puerto Rico officially proclaimed the cocktail their national drink.

“Escape (The Pina Colada Song)” is a song by British-born American singer Rupert Holmes. The song is about a man who is bored with his current marriage because it has become routine. One night, he reads the personal ads and spots an ad for a woman who is seeking a man who must like Pina Coladas.

Intrigued, he takes out an ad in reply and arranges to meet the woman at a bar called O’Malley’s.  They meet, only to find that the woman is actually his current partner. The song ends on an upbeat note, showing that the two lovers realized they have more in common than they had suspected.  They realized they don’t have to look any further than each other for what they seek in a relationship.

After its release the song became immediately popular, though initial sales were slow due to the song’s actual title, “Escape”.  Holmes reluctantly agreed to rename the song “Escape (The Pina Colada Song)” and it became the number-one Billboard Hot 100 hit of 1979. “Escape” returned to number one again on the Billboard Hot 100 charts during the second week of 1980. Thus it is the only pop song to hit #1 in the US in two different decades. 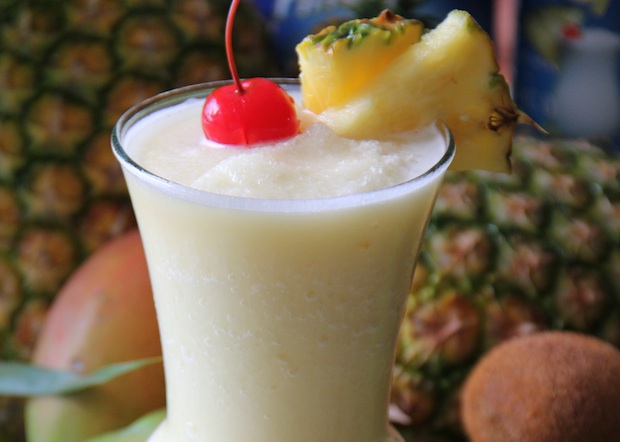 You’ll want to add this recipe to your book of favorite recipes.  It’s a great drink for parties and also a nice accompaniment to a refreshing tropical salad for lunch or dinner.  This frozen drink is a great excuse for pulling out the blender!

There are many different versions of the Pina Colada drink recipe.  Below you’ll find the original from the Caribe Hilton resort.

Pour all ingredients into a with crushed ice, and blend until smooth. Pour into chilled glass, garnish with pineapple wedge and a maraschino cherry.